NO STATE SCHOOL TAXES in PA, What do you think of that?

Have you heard? It is call the Property Tax Independence Act. 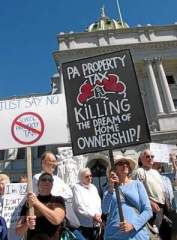 It is sponsored by Senator David Argall with “bi-partisan” support including one other Republican Sponsor and two Democratic Sponsors.

If I was to sum up the purpose and rationale for the bill it would be to: ELIMINATE ALL SCHOOL PROPERTY TAXES IN THE STATE OF PENNSYLVANIA.

Before I give my views on this (because I have many views on this and come are conflicting), I will go into the facts of the bill.  This bill is close to passage in both the Pennsylvania House and Senate and it is said that the current Governor Corbett (Republican) WILL sign it if it passes both and reaches his desk.

HOW: The funding to fund ALL Pennsylvania school would come from a few places:

Transition to this new system would take place via a two year phase-in period.  The first year, school property taxes would be frozen at their current level and in the second year they would be completely eliminated except for a small portion that will be retained in each school district to retire the individual district’s outstanding long-term debt.- Sen Argall

I have inserted an Excel Spreadsheet that you can download to calculate what YOUR savings will be based on this bill (Link Below):

Now Some people might think that this does not or will not effect them if it passes or if it does not.  I want to take a survey to see if it will effect you

This is a RADICAL change in the way things are done.  I was impressed with the thinking (whether I thought it was a good idea or what).  It did not seem to be one of those “get rich quick” eliminate this or that tax for a certain subset of people proposed by a team party or deficit hawk of some sort.

*Note: I did not mention “progressives” or liberals here because we are known for making more taxes not eliminating them (I don’t believe that but that is the political “knock” on us).

So I decided to look up and see if any other states were exploring this option.  Guess what, I was on my third page of my Google search before I found any mention.  It is/ was being considered in Illinois, Hawaii has not property taxes for their state, and Iowa has a hybrid system in place.

If you are a home owner (like myself, and live in a County or the many Townships of Pa., you might be counting your money now.  In Cheltenham, my neighbors and I would stand to save between $5,000 – $10,000 per year.  Yes per year.

But here comes the rain on that parade.  Many in my district that have children in the district will fee very nervous about what the fate of our “Blue Ribbon” school district will be.  As we are rebuilding our aged schools into beautiful monuments of education, we might wonder will it continue to have the funding to do these “Capital Expenditures”.

Some in the city may wonder, “will our district STILL be underfunded?”

It is a fact that many will save money, many seniors will be able to stay in their homes without the threat of that huge portion of their tax bill every year, home values will increase, some “ugh tax” housing areas will see an increase in the home purchases in that areas but at what cost to the education system is the bigger question.

Here is a chart and excerpt from a city Philadelphia city paper article.

There’s one problem: The math doesn’t add up, according to the IFO.

Though districts would break even in the 2014 calendar year, the IFO study projects a widening gap between expected future property tax collections and expected revenues through the new taxes proposed in HB 76.

“It is true that under the proposal they will not receive as much as they would have under current system,” said Matthew Knittel, executive director of the IFO.

According to the IFO projections, the gap would be a mere $3 million in the first year, but it would grow to as much as $1 billion by 2018-19.

“It is true that under the proposal they will not receive as much as they would under the current system,” said Matthew Knittle, Executive Director of the IFO

But rather than short-changing schools, some advocates of the property tax elimination plan see it as a way to control the spiraling cost of education, which has climbed faster than inflation over the past two decades.

Some believe that schools with shortfalls under the current system will really struggle under the proposed law.  The STATE would allocate funds to the schools NOT the County or Township themselves.  Many believe this is not only a recipe for disaster but for disastrous schools in the future.

Well, as both a home owner and Real Estate agent, this would be not only great for business but also great for my pockets as well.  I would sell more homes for higher values due to prospective buyers being able to afford “more house” due to suddenly low taxes.  I would also save money on my own mortgage due to the dramatic decrease in my tax escrow.  WOW.  I must be for this new proposed bill.  The National Association of Realtors is lobbying my member fees towards its passing so I must be for it.

Ummm, I am also a teacher and I have children of school age (at least for the next 4 years).  I am a Liberal politically and if that does not explain where I sit on this then let me just say I have some serious reservations and concerns with this proposed bill.  I am certain that this will not be good for schools.

The state controlling the purse for ALL school districts as well as monitoring the needs for new school buildings, repairs and other issues that may arise.  I feel schools WILL suffer, PERIOD.

My dilemma is if is passes, I will, if it does not, the students and schools will.

What is your thoughts?  Please vote in the poll on whether this bill should be adopted.  The poll is directly below:

Realtor at Realty Mark - CityScape. I am a tech savy eRealtor with expertise in Philadelphia and surrounding areas, specializing in 1st time home buyers/ sellers and investors. Father of 2 active children, living in the Cheltenham area of Pa. I am active in the community and online.
View all posts by dirktherealtor »